Racial Diversity in Leadership - What Can Businesses Do To Improve Equality? 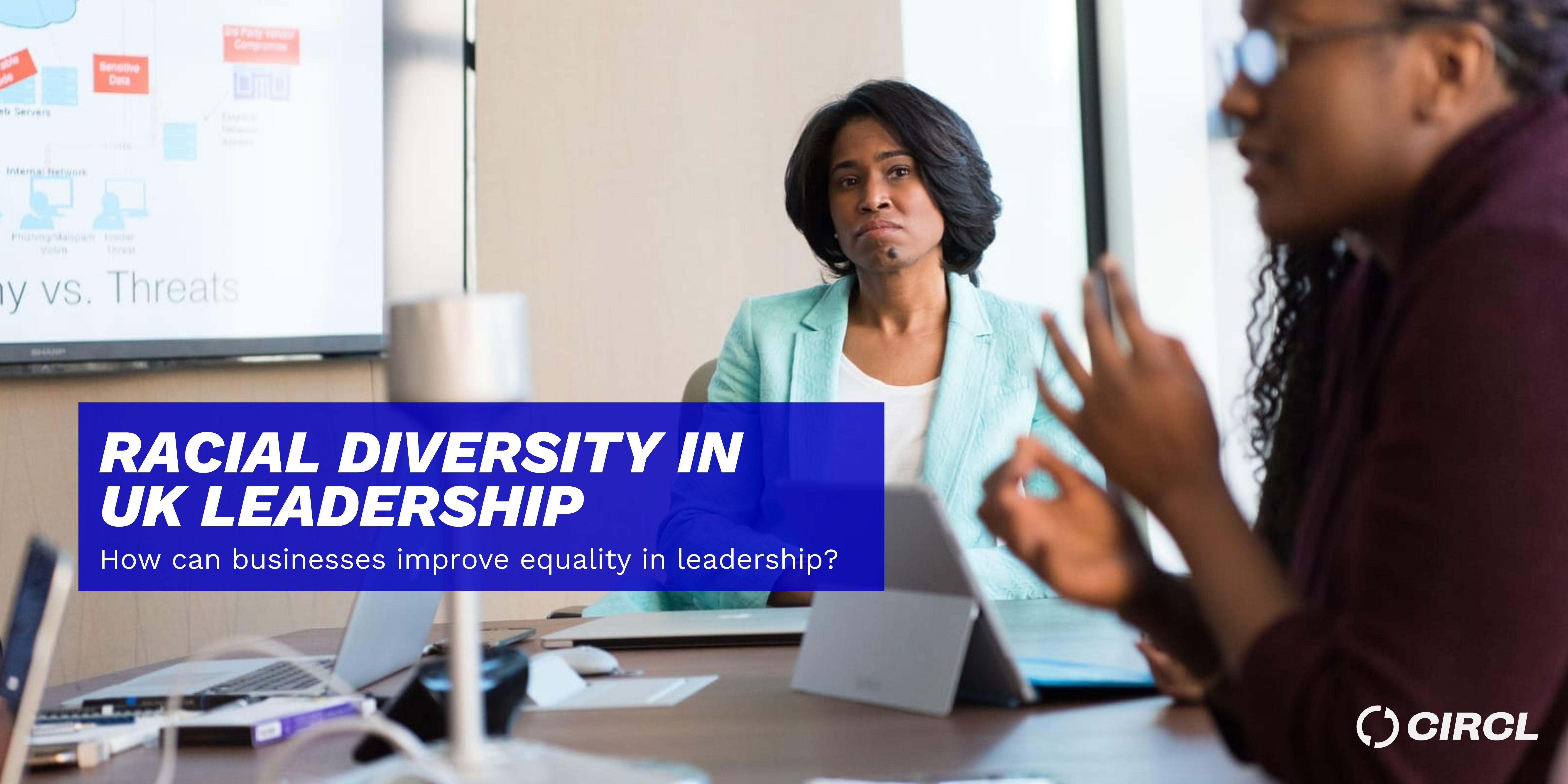 Following the 2020 Black Lives Matter movement, corporations around the world pledged to do better business when it came to tackling racial inequality. Consumers and employees were making it known that silence was no longer an option, and on #blackouttuesday there was an outpouring of company statements and promises to make necessary changes going forward.

One year on, we’re taking a look at how businesses have responded since then, specifically within the realm of race and leadership. As a business that’s dedicated to building a world of diverse leaders, we wanted to share the progress that’s been made and share our insight on further actions that can be taken to achieve an equal future.

Race equality in leadership within the UK

Let’s start with a current look at the UK - how are we doing in terms of diversity within leadership?

Between 2014 and 2019, a report showed that almost 4 in 10 UK organisations had no ethnic minority representation on their executive teams at all. The 2020 Colour of Power report found that out of the 1097 most powerful roles in the UK, just 51 of them were held by people from BAME backgrounds. That included 0 BAME chief constables, 0 BAME CEOs in the top 50 NHS trusts, and 0 BAME CEOs at the 15 national sporting bodies. Just 1% of journalists, senior civil servants, judges, academics and the police force are Black. And according to the BBC, there are no Black chairmen, CEOs or financial chiefs in FTSE 100 firms.

These eye-opening stats highlight a problem within leadership; though the UK has become more diverse, the decision makers haven’t. And to achieve equality, it’s vital that everyone has a seat at the table. While the stats show that we have improvements to make, the majority of those reports were taken before or just after the BLM movement. We know that many businesses put D&I action plans into place last year, so have improvements been made since then? ‍

Has diversity in the workplace improved since 2020?‍

The reports that have been conducted recently would suggest that not enough has changed, however it’s hard to say for certain due to the lack of data and limited timeframe to measure significant progress.
‍

From a survey of 55,000 tech workers in the UK, 88% noted no changes in the startup world over the past 12 months. Research by Green Park, a recruitment and diversity consultancy, found that the number of Black exec and non-exec directors on FTSE 100 companies’ boards has actually fallen, alongside ethnic minority representation in the leadership pipeline. It also showed that the same companies are unlikely to hit their government-backed target of employing at least one director from an ethnic minority by 2021.
‍

While progress within leadership seems slow, there is evidence that suggests improvements around general diversity within the workplace have been made. The BBC recently revisited 28 UK-based companies who made anti-racism pledges last year. Of the 23 that responded, the majority of them said they had introduced conversation and listening sessions for employees to voice concerns and engage constructively. Many of them said they now deliver anti-racism training to employees as well.
‍

Interestingly, just 9 of them have said they will publish an ethnicity pay gap report. A look into the diversity pledges of US-based corporations also found that employers were far happier to disclose anti-bias training plans rather than ethnic pay disparities.

Though it’s still too early to say, this poses the question whether employers are making the changes that are needed to make a tangible difference. While diversity training can help to educate employees, the programmes themselves don’t tackle inequality in the way that equal pay and leadership opportunities would. So how can we make sure that everyone has equal access to senior positions?

What should businesses focus on to improve racial inequality in leadership?

We asked our Future Leaders (talented students from underrepresented backgrounds) and Circl team members to share their insight into how businesses can go further than implementing diversity training programmes. Here’s what they had to say:

“Tap into different talent channels that wouldn’t have been originally considered by organisations, such as non-russell uni’s, word-of-mouth and youth group organisations.”‍

Improving access to leadership opportunities starts with allowing people from a range of backgrounds to get their foot in the door. And that can be challenging if recruitment processes require specific qualifications or rely on personal networks that not everyone has access to. This mini-guide to inclusive recruitment raises some excellent points on opening up your hiring process. Some of them include:

Open up to different leadership/working styles

“From my perspective, traditional notions of leadership are damaging as it usually centers around your ability to be domineering, selfish and detached from the workforce. How many times have we been told we need to "fake it till you make it?" This sends all the wrong messages to diverse young talent, one that tells them that in order for them to be a leader they need to change who they are. That they are not enough just the way they are. Businesses need to move away from this homogeneous view of leadership to one that has diversity, empathy and empowerment at its core. We need to champion people for who they are and allow them the time and space to figure out what kind of leader they are. Make the time to coach them in terms of their strengths and weaknesses. Support them in their stretch zones. And make space for different kinds of leadership within the business.” ‍

A study by Harvard Business Review found that Black employees with high career aspirations  actively avoided conforming to Black stereotypes. Code-switching at work is commonplace for many people of colour but individuals shouldn’t feel like they have to put on a persona. Not being able to be yourself at work can be holding someone back. Make sure that your organisation has a culture where employees feel comfortable being their authentic selves. You can find some inclusion tips in this Harvard study.

“As a leader within a business you should never assume that just because everyone has the same view around racial inequality, that it doesn't need to be discussed on a regular basis. I think the more we create opportunities for inequality to be discussed the better. It also makes sure that it’s at the forefront of everyone's minds when we’re going about the work we do. That's why we created open space for talking, listening and sharing experiences and views.”

Engage with networks and mentoring programmes

Establishing or engaging with relevant networks or mentoring programmes is a great method for improving diversity within leadership. Not only does it mean you’re actively building leaders for the future, but you’ll be creating a diverse recruitment pipeline for your job openings. This is a key part of our two-way coaching programme. By pairing the UK’s top businesses with underrepresented young people, employers help Future Leaders develop their leadership skills and gain access to a professional network. Harvard Business Review found that businesses who implement programmes with a focus on minority recruitment increased Black male and female managers by 8-9%.

We hope these tips are a good starting point for your D&I strategy. If you want to impact a Future Leader and take part in a learning experience to remember, reach out to us to discuss the Circl programme and how it could work for you.